Perpetuity and monumentality – the architectural principles of the National Socialist state and party – were especially at work in Nuremberg. The structures at the Nazi Party Rally Grounds were intended both to impress and to intimidate, to impose discipline and to build a sense of community. Architecture was placed in the service of propaganda and shows of strength. As the self-appointed "Builder-in-Chief," Hitler was often concerned with even small details of his great construction projects. From 1934 onward, he tended to prefer Albert Speer as the architect to carry out his fantasies of domination. Hitler engaged Speer not only to build the Nazi Party Rally Grounds – by 1950 he was also supposed to rebuild Berlin as the "World Capital Germania." Only a few components of the Nazi Party Rally Grounds were ever actually finished. Others never got beyond the foundations or half-completed shells. Work essentially ceased when the Second World War began. But planning still continued until shortly before the war's end. 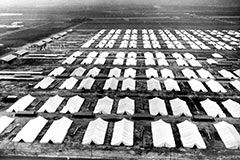 To accommodate the immense numbers of spectators and the mass marches of the various Nazi organizations like the SA, SS, Hitler Youth or the Reich Labor Service, there was a need for vast amounts of housing. So extensive tent encampments and barracks were set up on the southern part of the site. 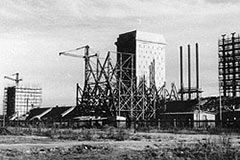 The Märzfeld, measuring 700 by 900 meters (2300 by 3000 feet), with ramparts and 24 fortified towers, was to be a setting for exhibition maneuvers by the Wehrmacht. The staged battles were intended to prepare the Germans mentally for war. The Märzfeld was never completed. 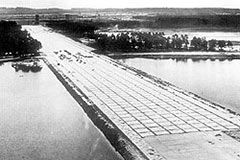 A 2-kilometer Parade Avenue (about 1¼ miles) led from the Märzfeld to the Luitpold Arena, and looked toward the Imperial Castle. It was intended to link the "City of the Reichstag" symbolically with the Nazi Party Rally Grounds, the "Temple City of the Movement." 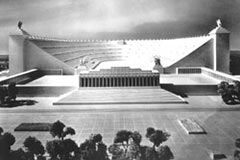 The megalomania reached its pinnacle in the German Stadium. Here more than 400,000 spectators were to be able to attend the National Socialist Games – a kind of "German Olympics." A full-sized partial scale model was built on a hillside near Nuremberg to check the slope of the stands. The final monstrous structure was to rise 130 meters – over 400 feet – into the air, but it never got beyond the foundation work. The enormous quantities of construction materials came in part from concentration camp quarries like Flossenbürg in the Upper Palatinate, where inmates were forced to work granite for Nazi constructions under inhuman conditions, under the principle of "extermination through labor." 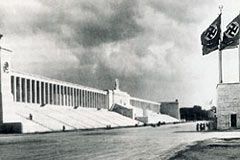 The Zeppelinfield, built from 1933 to 1937, was designed by Albert Speer in the style of a fortification. The massive use of banners was part of the overall design. They were to symbolize the continuous presence of power and – as Speer imagined it – be "wind made visible." The Zeppelinfield is the only part of the rally site's architecture that was ever completed. The ancient Pergamon Altar served as the model for the main grandstand, or Zeppelintribüne. During nighttime events, sophisticated lighting was to endow the structure with a solemn, sacralized atmosphere. 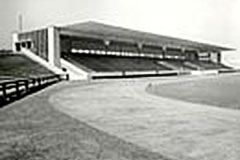 The Municipal Stadium, built in 1928, still survives in modified form directly next to the Zeppelinfeld. It was altered with two wooden towers, expanded entry gates and the "Führer’s grandstand." On "Hitler Youth Day," 50,000 to 60,000 young people had to parade here in front of the Führer. 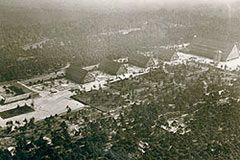 The Strength through Joy City to the east of the Nazi Party Rally Grounds was inaugurated in 1937. Big beer halls, open-air theater performances and bowling alleys were to provide additional entertainment for the Party Rallies. The wooden structures were originally built in Berlin for the 1936 Olympics, and then shipped to Nuremberg. 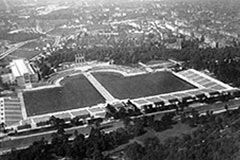 A park next to the Luitpoldhalle was restructured as a parade field for 150,000 people. The altar-like installation was dominated by three gigantic banners and two bronze eagles on the side wings of the grandstand. In this Luitpold Arena, the Nazis held their memorial celebrations of the "Martyrs of the Movement." The memorial monument was joined to the speaker's platform by an "Avenue of the Führer." 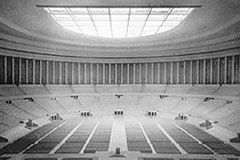 The monumental Congress Hall next to the Dutzendteich lake is reminiscent of the Colosseum in Rome. Hitler wanted a special building for the Party Congresses, with seating for at least 50,000. Apart from this particular use, the building had no other purpose. A beacon tower and the zoo, opened in 1912, had to be relocated to carry out the designs by architects Ludwig and Franz Ruff. Besides that, the swampy ground made elaborate and expensive foundations necessary. The Congress Hall, begun in 1935, remained a torso after work was suspended in September 1939. Nevertheless, today it is the largest surviving relic of the dictatorial architecture of the Third Reich.

Only a small part of the National Socialists' building program ever reached completion. Most of the construction work was suspended when the Second World War began, but planning still continued until shortly before the war's end. Purposeless ever since 1945, the gigantic ruins remain a testament to a megalomania that ended in catastrophe.

Back to the overview page "The Nazi Party Rally Grounds"